As much as I love traveling around France, visiting medieval cities that have been around since the Roman era, and using my not-so-good francophone skills, I couldn’t wait for Phase 2!

First let me tell you how Phase 1 ended!

After Paris, I took the train to Troyes, to visit another Rotary exchange student friend of mine, Chloé Soto-Mayor. Her city has a population of 60 thousand inhabitants and it is located on the Seine river about 150 km (93 mi) southeast of Paris. Troyes is also the capital of the Aube department in north-central France. In medieval times Troyes was an important international trade centre, centring around the Troyes Fair. The name troy weight for gold derives from the standard of measurement evolving here.

Chloé and I tried to meet up in France for about 5 months, which never worked out, and then finally as I am leaving the country I stopped by in Troyes to spend a weekend with her. It had been a year since we last saw each other, and as usual, it feels like nothing has changed, like we had just seen each other the week before. The difference is now we had an extra secret language; French. Well, not so secret here.

We spent a great weekend together, plenty of wine, cheese and bread, my favorite things in France. I feel like it was a decent ending for my Phase I: France, and that just made me even more excited to leave France and go visit some other old friends I had met in the United States. 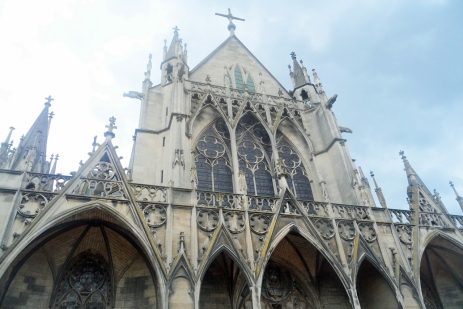